Have you ever been face to face with a giant snow plow truck? I was in a situation a few days ago with Freedom Writer (hubby) and a giant snow plow truck that put us in a race for our lives! Well, it wasn't that dramatic, but it definitely involved a random act of kindess by a complete stranger, which fits the criteria for this Fun Monday's topic hosted by Jill from Life is Not Bubble Wrapped. 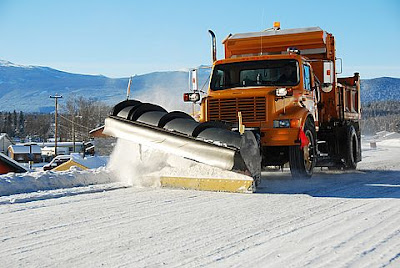 
Please tell about something nice someone has done for you, or an act of kindness you witnessed a loved one perform, without being asked. It can be lately, or years ago, but something that touched your heart, and that you remember for that reason.
As you are all aware, the Eastern part of the US was hit by a double blizzard over the past week.  The south central part of PA received approximately 3 feet of snow between the two storms. During the midst of the second storm, Freedom Writer decided he would attempt to drive his truck about 2 miles down the road to pick-up my oldest daughter who was snowed in at a friend's house. He ended up veering off the road no more than 500 feet from our driveway into a small ditch which had been covered with a 2 foot snow drift. He was stuck.
After FW shoveled the massive amount of snow around his truck, I attempted to "pull" him out by attaching a rope from my vehicle to his. All of this transpired during blizzard conditions, in the dark cold night, with barely one lane of road visibly passable.  FW's truck simply would not budge and my truck kept spinning wheels in the drifting snow. Meanwhile, a giant snow plow truck was headed right towards us!
Despite FW's suffering from frost bite and starvation, he quickly jumped in the driver's seat of my truck and backed it up all the way to our driveway while the giant snow plow beared down on us! We were in a race for our lives! (Some events may be dramatized for story telling purposes.)

After we made it back into our driveway, the nice Township worker in the snow plow truck jumped out and asked if he could help pull FW's truck from the ditch.
First though, the Township worker asked if Freedom Writer was a Raven's or Steeler's fan. Freedom Writer replied without hesitation, "I can be any fan you want me to be tonight!"  The giant snow plow swiftly pulled the truck from the snow covered ditch and all the way back safely to our driveway.
Come to find out, the Township worker (Steeler's fan) is practically our neighbor who lives less than a mile from us on the same road. Freedom Writer dropped off a case of beer to thank him for his random act of kindness.
Be sure to click on over to Jill's to see what the other participant's are sharing today. Thanks for hosting Jill! Next week, Jill will be hosting again. We will be asked to share stories of random acts of kindness that WE have performed for others.

My fingers were freezing just listening to the description. But warmed up quickly --
But I think I'm going to stoke the fireplace anyway

Now that was a cold story with a very warm ending. Good samaritans are among us everyway!

I am glad the snow plow driver decided to rescue you rather than oblizzardate you.

You know, people like that are priceless. My brother is such a person - I wrote about him for my own assignment. I'm glad everything turned out okay - it's been years since I drove in snow and I'm not especially eager to do that again.

Great story! Nothing like a good neighbor...with a snowplow.

Thanks for playing along. I remember, growing up, not that long ago! When random acts of kindness were just a part of life. We lived out in the country and we pitched in as needed, because you had to. Because it was the right thing to do.. We didnt have to have a special week for them. I'd like for that to be a part of my life again, and seems like your plow driver has the same idea.

It is a small world. We have been filled with neighborly love around here too, each helping the other dig out!

Oh, Cl! This was a great story. And you're right--never let the full set of facts get in the way of a good story. Don't know how your road crews are keeping up with the pounding you all are receiving from the weather. At least around here we had a three day weekend to recover from the snow--back to school and work tomorrow though. The snow plow driver had a good sense of humor--essential to keep going in your bad weather conditions. Wonder how much beer he's "earned" recently? :-)

That was a great story! He didn't have to stop and help but did anyway!!

I love a great adventure story with a happy ending. All down our street neighbors were working together, too, to help each other dig out. I saw a saying recently that said, "Love your neighbors, but don't take down the hedge." I think hedges might be overrated.

You described the scene so nicely that I was living and freezing with you !
I have never been in such a situation because we never had such a lot of snow !

What a terrific amount of snow! How lucky to have helpful people in such harsh weather!

Showed the pictures to 'himself' being an engineer he was really taken by the size of the snow plough and vehicle!

I beloved as much as you will [url=http://pandoracharmsukmart.co.uk]pandora charm bracelet[/url] obtain performed right here. The sketch is attractive, your authored subject matter stylish. [url=http://pandoracharmsukmart.co.uk]pandora charms sale[/url] , nevertheless, you command get bought an edginess over that you wish be handing over the following. ill no doubt come more formerly again since precisely the similar nearly a lot regularly inside of case you protect this increase.