If you read my prior post here, you may already know that I attended the Tax Day Tea Party on April 15th. There were hundreds of "Tea Parties" staged across the nation on this day and we chose one that was fairly close to our home in Westminster, MD. The Tea Party gatherings were inspired by the 1773 Boston Tea Party to protest excessive taxation by the British Government. 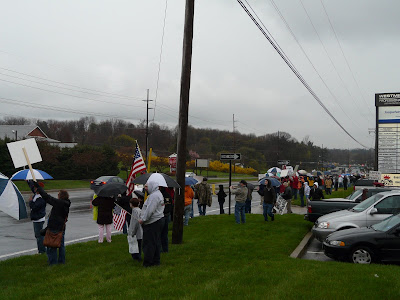 Other family members joined us in what was our first protest ever! Despite the cold and damp weather, the rally was festive, exciting and for the most part positive. There were hundreds (approximately 750) of patriotic Americans from all political parties voicing their dissatisfaction against Government spending and taxation and exercising their freedom of speech. 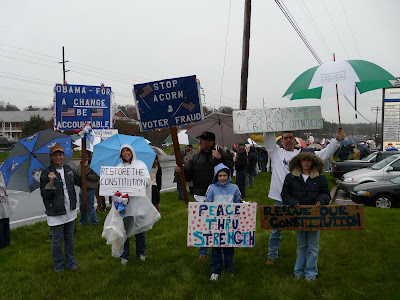 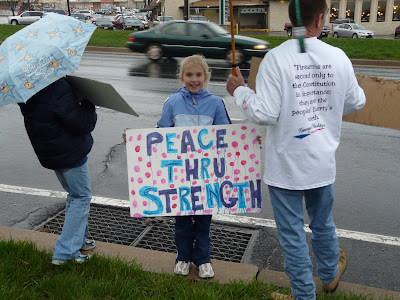 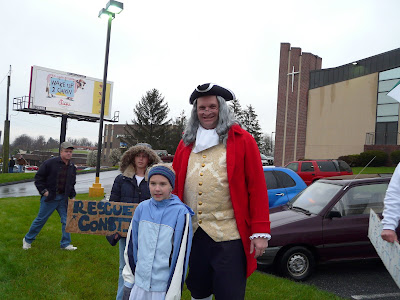 Will the Tax Day Tea Parties make a difference? Probably not. Will there be more Tea Parties in the future? Probably so. Sometimes it takes action to get the attention of Congress from We The People who still believe in the principles our country was founded on.
p.s. My husband and daughter made the front page of the newspaper. Click here see the article.
Peacefully Yours,

Drat...I got here too late. I think they changed the front page. I will do some looking around. Anyway - fascinating writeup! I wondered how things went, with the rain and ickiness. Sorry my Pilgrims joke didn't get a laugh. For what it's worth, I used to roll my eyes when I was that age and my mom would tell me jokes. (But I still remember them and giggle at them now...) TGIF to you!!

What a wonderful feeling to excercise your freedom of speech. This is a great country we live in. Happy it was a peacful protest.

Ditto the fabulous Janis, above...the right to peaceful demonstration is one of the many great things about our country. Glad all went well. And thanks for the updated link and article! You (or your family at least) are famous!!

*gasp* They are stars now! I am glad you did this. I looked for one around me, but couldn't find one!

Why is it that Americans want their government to take care of their every need, yet don't want to pay the taxes it takes to do that?