Roland Down the Road

What a glorious weekend it was here in Southern PA. The temps were in the high 60's to low 70's and the sky was the most beautiful shade of baby blue I have ever seen. There was a touch of Fall in the air and rightly so, since tomorrow we officially welcome the season. With a  hundred and one household chores to be completed, we chose to skip out of the house and take in the delightful weather instead. What better way to enjoy the outdoors, than a ride upon a polished boss motorcycle with my country biker dude{slash}husband. With the cool wind blowing across my body and the warm sun shining down on my face, it was truly an awe-inspiring ride.

Our trip began around 10:30 Saturday morning. We were accompanied by my FIL and my oldest daughter. Our destination...Lake Roland (click to learn more) in Baltimore, Maryland.  Lake Roland served as the first municipal water supply for the city of Baltimore starting in 1861. The city stopped using the lake as a drinking water source in 1915. We chose the destination of Lake Roland for three reasons: 1. It was the area in which my FIL grew up in and he wanted to re-visit his childhood playground,  2. Niether me nor my oldest daughter had been there before, so it was a new place for us to check out and 3. It was about an hour ride from our home and not too terribly far to travel. 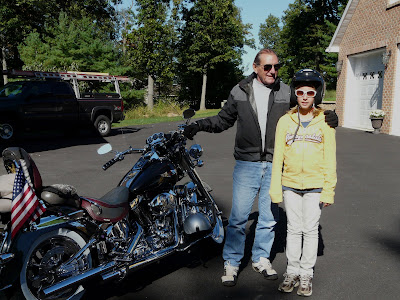 We arrived safely at our destination at 11:30 am and decided a hike around the lake would allow us to stretch our legs and take in the beauty of the wooded serene area.  As we began our hike, we couldn't help but notice how the trails seemed to be grown up with brush and debris. There were no more grassy picnic areas. The weeds had grown tall and trees were beginning to fill in the vacant areas. The pavalions were falling down and it looked as if no one had pickniced in them in years. As we ventured around the entire lake to the other side, we ended up at the abandoned caretakers home. It was obvious that the home had a serious fire several years ago. We were able to sneek inside the creepy old house. The smell of soot was still lingering  and the walls in every room were covered with a blackened residue. It was a sad sight. 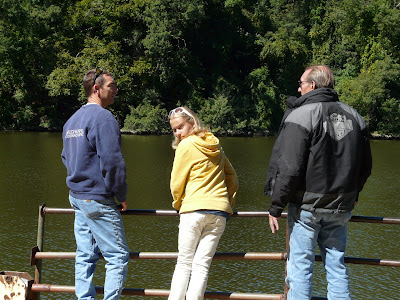 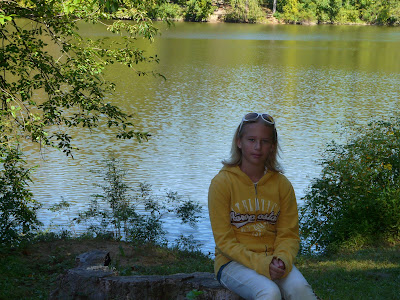 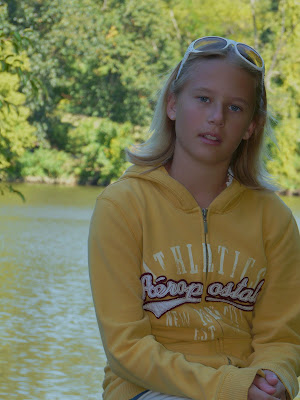 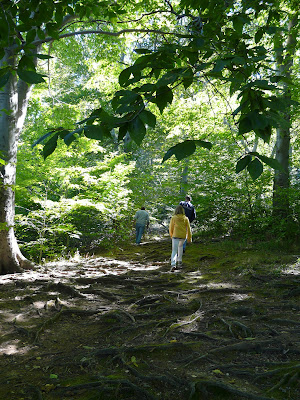 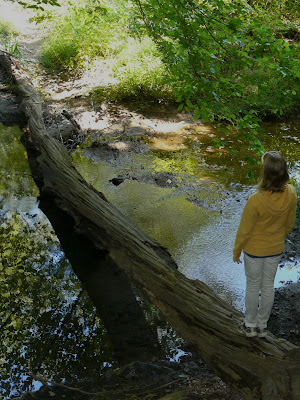 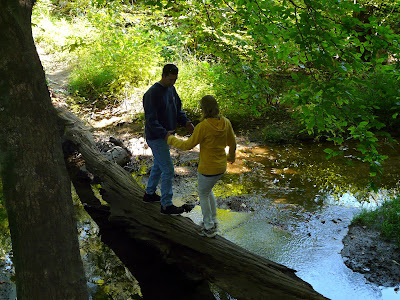 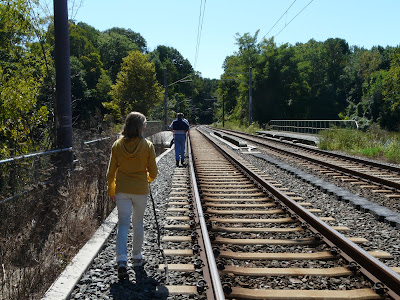 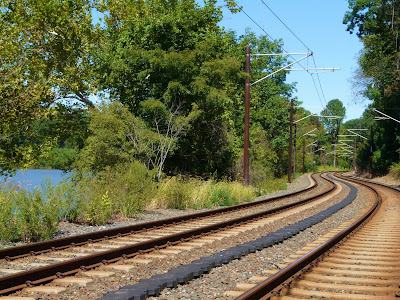 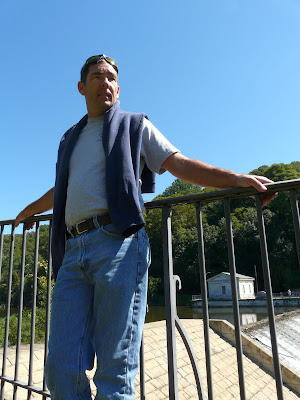 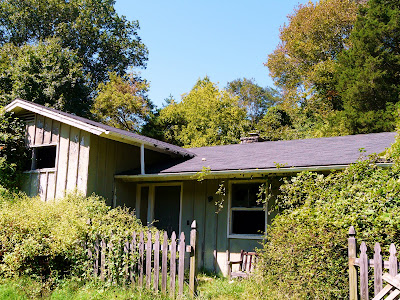 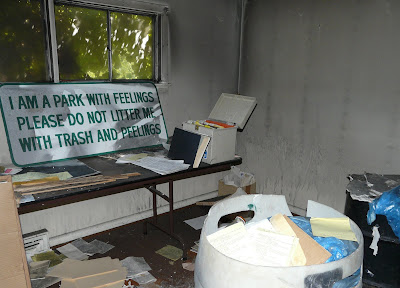 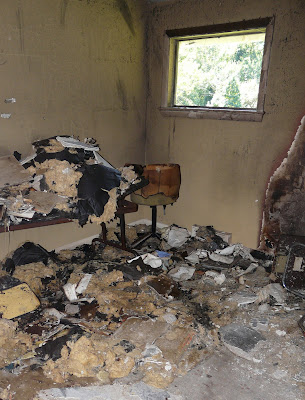 After exploring and playing detective in the old run-down abandoned caretaker's home, we decided to make our way back to the bikes. Rather than walk the entire way back around the lake which was a good 3(?) miles,  we decided to keep tracking forward.  (Note: my 70 year old FIL was the leader of the pack and we had to make great strides to keep up with him.) We stumbled across an old footbridge only to find a chain linked fence with barbed wire and a locked gate at the end. We were trapped. Only way out was over the gate, which was about 15(?) feet high. So, rather than hike back around the lake, all four of us climbed over. Good thing I've nearly lost 38 pounds. Otherwise, I don't think I would have been able to haul my arse over that thing! 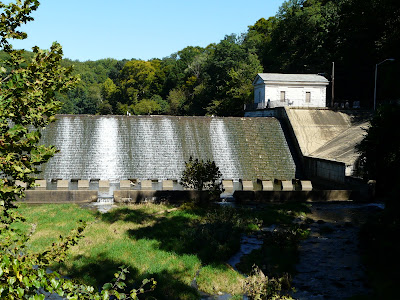 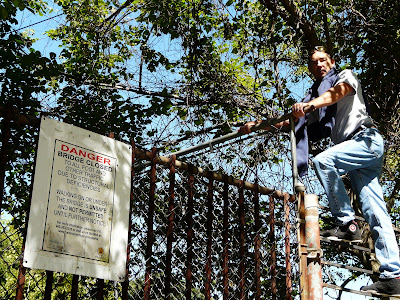 It was a little disheartening to see that Lake Roland had not been maintained or cared for in a long time. There have been many tries to rejuvinate the park, officially named Robert E. Lee Memorial Park. But, the park is owned by Baltimore City, and all 100 acres is located in Baltimore County. There are many issues surrounding who funds the money for the upkeep.

Back on the bikes, we headed to Poulet for lunch and ice cream. 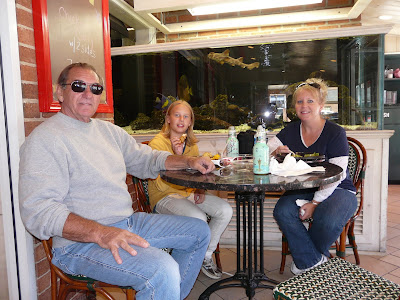 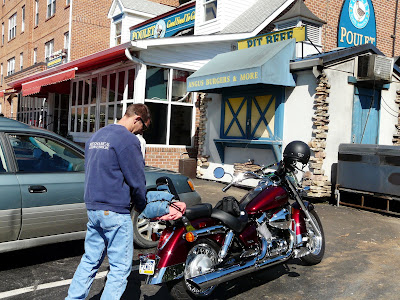 It was a glorious day!


Life's Little Words of Wisdom: Don't wait for memories to happen. Plan them in advance.

Tomorrow I will offer you part II of my wonderful weekend!

Ohhh...looks like a place I would love to visit. What a great weekend...couldn't ask for any better weather!

How wise you were to leave all those weekend chores behind and take advantage of a wonderful fall outing, Church Lady. I love the photo of your husband and daughter helping each other "walk the log." And I'm still trying to figure out if I could haul my arse over a 15ft. fence. The answer is probably "no" even if there were a pack of mad dogs lunging for me.

I need to lose 15 lb. by October 14 physical exam. How are you and moms managing to be so successful with your wt. loss efforts? Out with those secrets!!

What an incredibly great day! My first car was a motorcycle and I still love riding.

It is sad that the park isn't maintained because it certainly is beautiful.

Wow - what a fabulous trip! So sorry to hear that the park/house area isn't maintained as well as it could be, though :-( I know that when money is tight, sometimes the scenic/historic areas are the first to lose funding. Not sure if that's the case here or not.

That looked so cool! I loved the sign in the run down house. And the climb over the wall! Holy cow! That will make great memories!

You always find interesting places to visit. Thank you for sharing with the rest of us. You look awesome!