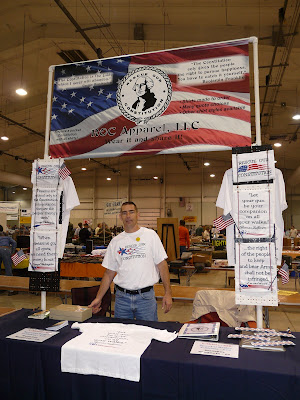 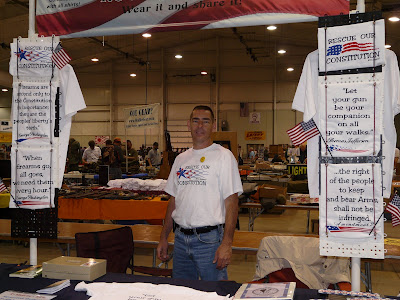 Well, it's official. ROC Apparel has been launched and introduced this past weekend to fire arm enthusiasts and collectors at one of the largest Gun Shows on the East Coast! What does ROC Apparel stand for, you ask? It is short for "Rescue Our Constitution". The newly formed LLC specializes in T-shirts and other apparel adorned with powerful and meaningful quotes from past Presidents, Founding Fathers, Inventors and upstanding U.S. Citizens. President and founder of ROC Apparel (my hubby) says that his mission is for people to "wear it and share it". With every purchase from ROC Apparel, customers receive a complimentary Pocket Constitution. You will find ROC Apparel at many differnet upcoming local venues other than gun shows, including motorcycle shows and a few craft shows here and there and due to popular demand, apparel will also be available to order via the internet, eventually.
Here are some of the quotes listed in his current inventory:
"The Constitution
is the guide which I
never will abandon"
~George Washington
"Let your gun be
your companion on
all your walks"
~Thomas Jefferson
"Beer is living proof
that God loves us and
wants us to be happy"
~Ben Franklin
One thing is for certain, my husband is determined and very well prepared for this new part-time endeavor and I am most proud. He has had great support from the family and he is thankful.
I will keep you posted on the progress of ROC Apparel. The web site is currently under construction, but please bookmark it for future reference http://www.rocapparel.net/
Proud Wife,

Yay for entrepreneurship! Best of luck to your hubby in his new venture!

Good for Hugh, I am so proud of his determination. We wish him the best of Luck in his newest venture. Its really a great idea, hope it catches on. I love the beer quote from BF, that one will do well at the Bike shows.

How cool! Let me know when they are available and I will order a couple for sure!

Love the one that says "Beer is proof God wants us to be happy"! I'd like to order a medium for myself and order a large for Dad. He"ll love it!