Could This Be Phil's Last Live Appearance? 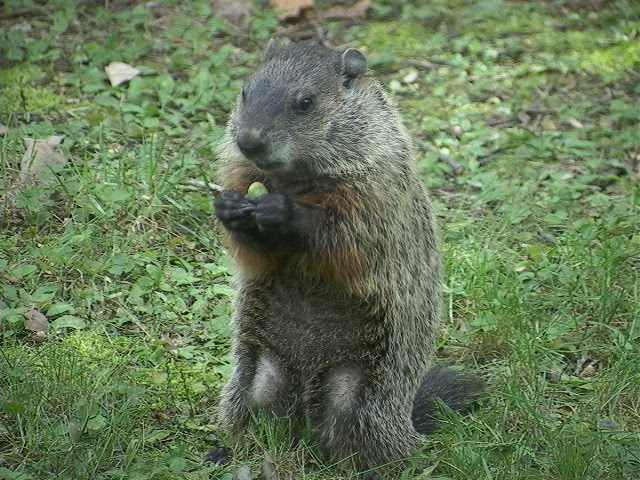 If you will, Phil, please stay outside and play a while. I'm begging you!

Groundhog Day is celebrated in the U.S. each year on February 2nd. On this day, the groundhog awakens from a long winter's nap, and goes outside of his den to see if he sees his shadow. This tradition is big on an otherwise cold and dreary mid-winter's day.
If the groundhog sees his shadow, there will be six more weeks of winter. He then returns to his den and goes back to sleep. If however, he does not see his shadow, spring is just around the corner and he stays outside his den and plays for a while.
According to Holiday Insights, Groundhog's Day tradition comes from German roots. German immigrants brought the tradition with them from Germany. As they settled in the hills of Pennsylvania, they began the tradition of using the groundhog to predict the arrival of spring.
Punxsutawney, Pennsylvania is the site of the annual Ground Hog event. Our little rodent friend (yes, Groundhogs are classified as rodents) is called Punxsutawney Phil. There are a few other "predictors" around the country, but they all pale in comparison to Phil's ability to predict the remainder of winter.
For the Record, Phil sees his shadow about 9 out of 10 times.
BUT, could this be Phil's last live appearance? Could PETA (People for the Ethical Treatment of Animals)  force Phil to become replaced by a robotic groundhog?? PETA has had enough of this tradition that dates back to 1886 and feels robotics is the answer. As posted on PETA's website, they claim that groundhogs are very shy animals and can become "distressed" when exposed to large crowds and too much excitement.
While an electronic rodent sounds like a neat idea, I think that groundhog bots have a long way to go before they can charm crowds the way Phil can. What do you think?

This falls in the category of "in the grand scheme of things let's decide what's most important." In Louisville PETA is targeting the KFC corporate headquarters for inhumanity toward chickens. . . I'm all for Phil being in the spotlight for many more years to come. He can kick back after he's done his weather forcasting!

I would hazard a guess that Phil, who only has to work one day per year, has life a heck of a lot easier than his wild cousins. Those PETA folks need to stick to real animal cruelty matters and not belittle themselves with nonsense.

Yep...I am with all of the above...Peta has crossed the line...read my post. Give me a break..they make themselves sound like a bunch of idiots! I really dont think this little animal is being treated in a cruel way!!!! Looks like Phil saw his shadow...so stay cozy for another six weeks of cold winter!brrrrrrrrrr

I agree with the above!

Sounds like PETA is a bunch of cry babies. Give me a break. It would be nice if they targeted groups who actually are cruel to animals.

As a little girl growing up in MD I have always remembered the great anticipation of Phil! It's tradition- PETA should find more important matters to contest.

I remember reading something about calling the team out of the gym on Feb 2 -- and if they see their shadows we get 6 more weeks of basketball. ha ha.

I love Pux Phil and think the PETA folk are more than half a bubble off plum.

Seriously!?! It just goes to show how crazy the PETA people are. Give me a break! In Chicago there's groundhog that goes to a TV station and pulls on a flag that tells what the weather prediction will be!

I agree with all of you. PETA needs to get a real life and fight for some REAL cruel treatment of animals.

Grrrrrrrr Ok I am going to go now and eats some chicken or beef. ;)