S - P - U - D period spells spud! Have any of you ever played this lively ball game? Spud is a simple, fast paced game that contains running, dodging and throwing and can be played by kids and adults of all ages. The game is one of our family favorites and we recently played it during Mom's Labor Day cook-out. All you need is a soft playground size ball and a group of about 6-8 active people. It is recommended that the game of SPUD be played outdoors! 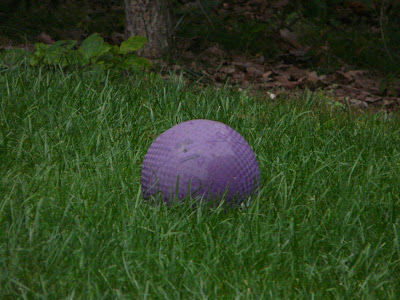 Begin the game with everyone together in a bunch. One player in the center of the bunch tosses the ball high up in the air while yelling out another player's name (or number).  All other players run and disperse in all different directions except for the person whose name/number was called.  The person whose name/number was called must catch the ball and yell SPUD!  When SPUD is called, everyone must freeze.  The person holding the ball must take giant steps towards any player while saying, S-P-U-D period spells spud. He/she must throw the ball and try to hit another player. To dodge the ball, a player may move any parts of their body except they must not move their feet. If a player is hit the first time, he/she earns an "S", eventually spelling the word, S-P-U-D. The person who was hit becomes the new thrower, otherwise the person who missed earns a letter. The next round begins and play continues. The first person to spell S-P-U-D is out of the game. The last person to spell S-P-U-D is the winner! 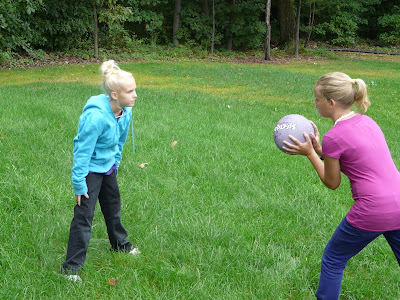 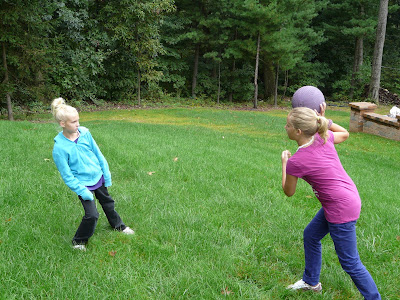 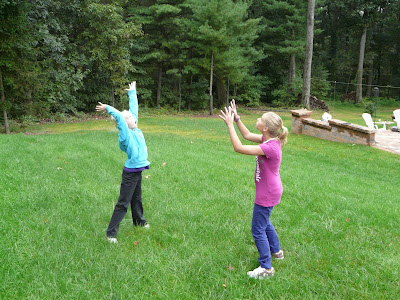 There are many variations to this game and it is great for kids parties, youth groups, family reunions, etc. Adults are encouraged to play, as it is a great way to be active at your next cook-out! Work off that cheeseburger!!!

What kind of outdoor games or activities do you like to play?

Never heard of it. But I'm sure Makayla has probably played it in school.

Sounds fun, but I was never good at games like this and likely would always be the first one out!

Wow you're bringing back wonderful childhood memories Kelly. What about spotlight? Remember that one?

Wow - I think I do remember that game! Sounds like great exercise. As a lifelong klutz, though, I don't think I ever did very well at it.

Now, to the question du jour - J and I were both avid bikers as kids and teens, but got out of it as adults. This spring and summer, though, we got back into it (road and mountain biking) and it has been a BLAST!! It's great exercise, and it's never boring because the view is constantly changing. I did fall off my bike last weekend (see above re: lifelong klutz) but I was fine *grin*

My family often played Bocce. It was a game both old and young could always play. I also remember Jarts! Those were the best. When it was just the kids, we'd play bloody murder. (Some kind of tag game as I recall!) Now we play bags and croquet.

I totally forgot about SPUD! Love it!